I would like to start off this blog with an apology. I’m sorry I missed a post last week- I’m sure you will never recover from the gaping hole I left in your weekly reading, but I’m hoping we can all move on from it.

To make up for missing a week, here’s your 2 for 1 blog post!

What’s On Your Playlist?

In 2009 CenterStage presented their show, What’s On Your Playlist? for their growing fan base. Similar to their first show, Anything Goes, the show was made up of a wide variety of genres and styles.

In my research (read rifling through the supply closet at the CS studio) I discovered there were not as many artifacts left from this particular show. So with the program in hand here’s a quick overview of the show:

The full show choir performed 7 songs, the band played at the beginning of each act, and soloists and small ensembles rounded out the show to hit a total of 17 numbers.

While I was not directly involved in any part of this show, I do remember seeing it from the audience and there are two very distinct memories I have from it.

First, during the second act the entire show choir performed a number called “Dance Evolution”. From Elvis to N*Sync, the choir did not disappoint. I fell in love with the singers a little bit more as I watched them “shake it like a polaroid picture” and chant “ice, ice, baby”. I still can’t think about it without smiling.

My second most vivid memory from the show came from a female quartet singing “Wade in the Water”. I was instantly hypnotized. It was soulful and powerful and showcased 4 powerhouse voices in a way I had not previously seen in any other CenterStage show.

I vowed at that moment that I would someday make it on stage with these women. I have continued to be inspired by these fantastic performers and am so thankful that I have had the opportunity to perform alongside them.

Not every audience member is suddenly called to join in the fun on stage, but after 3 years of producing free entertainment in the Wausau area, CenterStage was inspiring more and more people to support the arts each fall.

“The group has grown in popularity throughout the years and has worked to become a presence in the community.” -Wausau Daily Herald Sept 2010 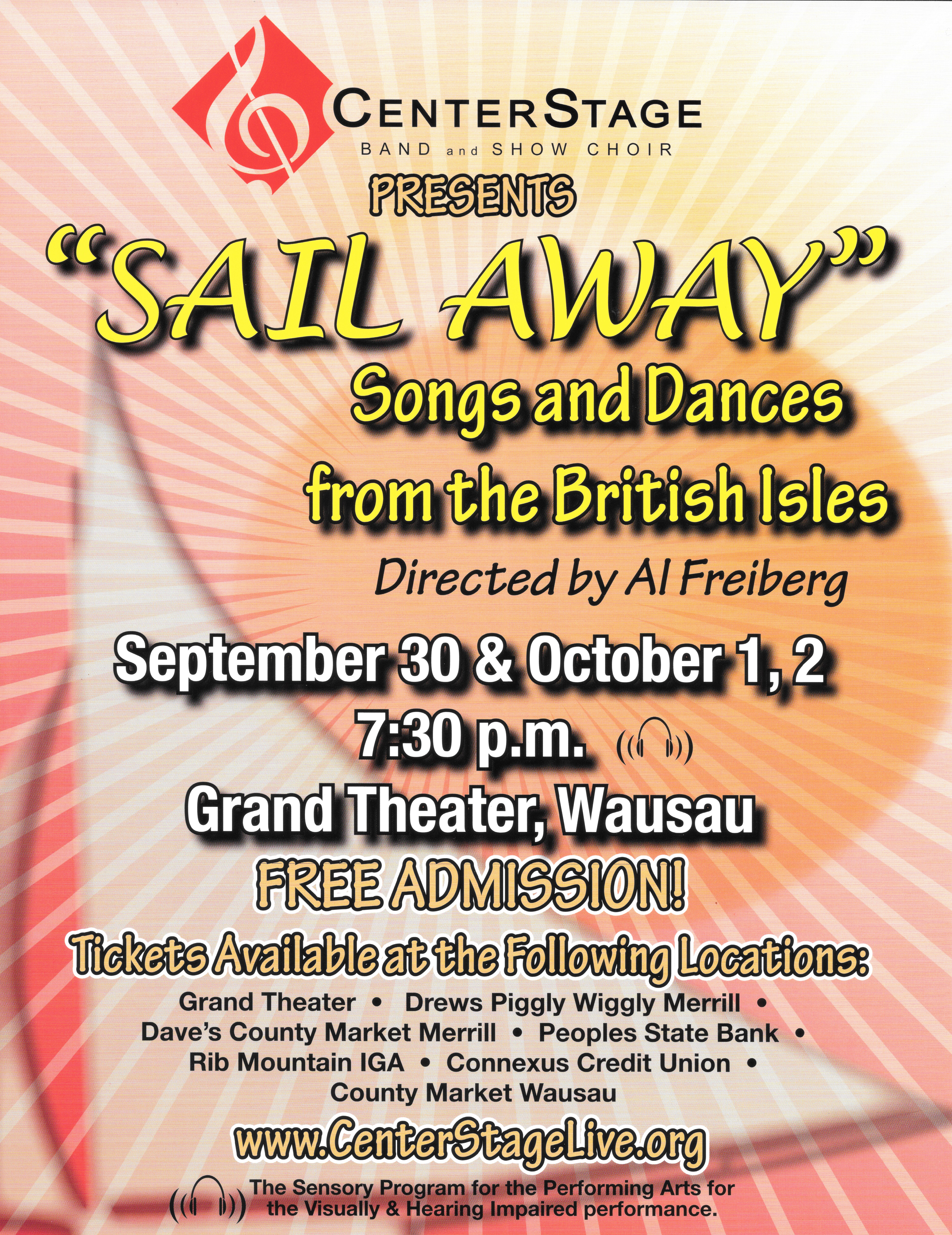 Sail Away: Songs and Dances from the British Isles

The group continued to pick up speed as they moved from a wide range of songs as diverse as the performers who sang them, to a more localized theme for their 4th show in 2010, Sail Away.

Sail Away was all about songs and artists “across the pond” and it seemed to be a favorite among performers.

I asked some members to pick their favorite CenterStage performance of the last 10 years and many of the responses were songs from 2010 including:

What I have found most interesting as I look back on this show is that I can picture and remember Every.Single.Number. I was involved in this show (another year of acting- this time with an Irish accent), but even so, as I scan the program to prepare for this post I am immediately taken back to all of the great songs that were featured.

Maybe it was the familiarity of the music: The Beatles, Queen, The Spice Girls. Maybe it was just an overall fun show. Maybe it was because I lip synced every number off stage. Whatever the reason, 2010 felt different. It was energetic and moving. The actors were brilliant and funny. Where else could you find Mick Jagger, Austin Powers, the Queen of England, and an Irish girl causing shenanigans together?

Overall, CenterStage was on a whole new level. Looking through some press from the show I think it is safe to say I wasn’t the only one who thought CenterStage hit a new high with Sail Away.

And here we are, some years later, trying to raise a bar that is being elevated on a yearly basis. Sail Away was a magical show and this year we hope to capture some of that magic again.

This year CenterStage has a few connections to the British Isles singing “Strongest Suit” (first performed by CS in 2010), selections from Once, and at least one song by Andrew Lloyd Weber.

We hope that this year will be as memorable as every year that has come before, and we can’t wait to raise the bar one more time in our 10th season!

Mark you calendars for September 29- October 1  for A Night on Broadway!