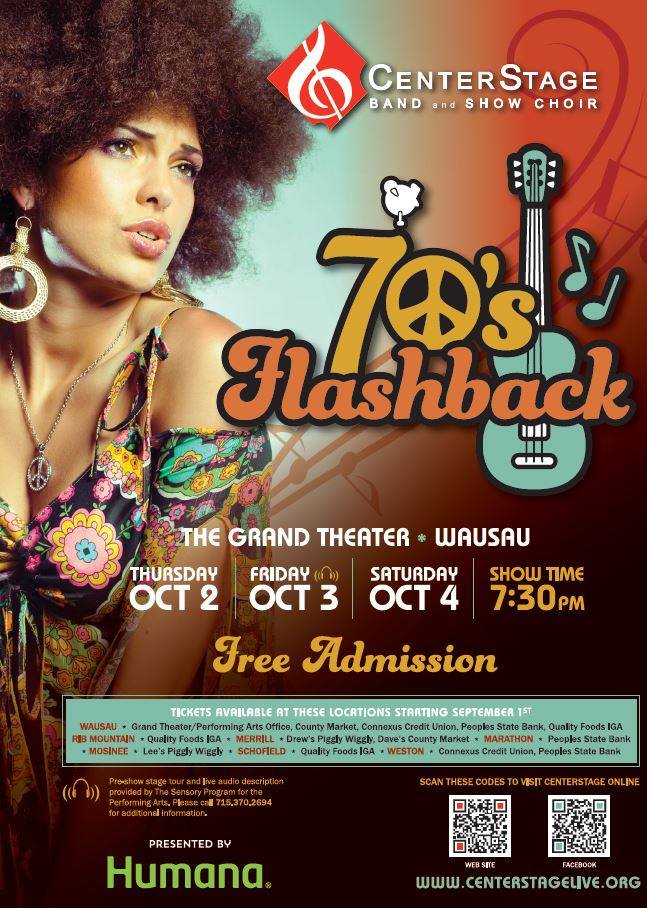 CenterStage’s annual show is less than 2 weeks away and we are very close to wrapping up our 10 for 10 series.

Let’s flashback to 2014 where CS put on one of the most colorful and high energy shows celebrating the 1970’s. It truly was FAR OUT!

Before we get into the breakdown of a totally groovy show, I have a very quick story:

Note that 2014 marked a huge spike in our publicity efforts. CS was everywhere! Not only did we plaster the town with our posters, we had teeshirts, and our PR team was on the morning news in bellbottoms and afros.

2014 was my second year as a performing member of the CenterStage choir. I felt like  since I had successfully accomplished one show, I was doing well to stay cool as a cucumber during the final weeks of preparation for the next.

One lovely September day, about 2 weeks before the show, I was driving down Grand Avenue in Wausau and to my excitement I saw a new billboard advertising CS’s show. I was more excited than I thought because the passenger with me had to brace themselves and tell me to stop before I hit the car in front of me.

What’s the point? (Besides that I am very excitable and probably should be told in advance of new and exciting publicity?) I continue to be excited about CenterStage no matter how many shows I’ve seen or performed. Most performers can’t answer the question, “What has been your favorite year?” Some, including myself, settle on saying that the current show is the favorite, and will continue to be until the next one comes around.70’s Flashback will always be in my top 3 CenterStage shows because it really was a blast to perform. Everything was so bright and happy. We got to have a dance party on stage every night!

Every year, around this time, we start practicing full runs of the show. Anticipation gives even the most seasoned performer butterflies. And these next 2 weeks are no different. As we work to perfect every number and start planning our move into the Grand Theatre, our excitement is rekindled and builds all the way up until opening night where we pass that energy to our audience.

As much as I think I can do justice to these shows by writing about them, this one in particular should be relived through pictures.

Check out some great photos from CenterStage’s 2014 show,  70’s Flashback.

Can you guess which number was being performed?  (Answers at the bottom of the post)

If these pictures don’t make you excited for another year of CenterStage: I don’t know what will!

Pick up your tickets and plan for a night of fun at the Grand!

6. Listen to the Music